Everywhere I look, I see people bashing the Dark Tower movie.  Very few people are actually defending it.  So, I’m going to talk about it, and I’m going to go deep into spoiler territory, for both the movie and the books.

The books start with one of the best opening lines: The man in black fled across the desert, and the gunslinger followed.

This is a great opening because it gives us our protagonist, our antagonist, and our setting in one line.  Roland, The Man in Black, and the desert, which really is Roland’s world.  A world that has moved on.  A world that looks like it might once have been like our world.  But different.

In the first book, Roland knows he is a gunslinger.  He is resolute.  He is duty bound to a fault.  He is willing to let a boy fall to his death in order to achieve his goal.  Ultimately, his goal is to get to The Dark Tower.  The Man in Black is just a stepping stone to achieve that goal.

Continuing on with the books, Roland draws his companions to him.  We learn about what it means to be a gunslinger.  We learn about those that traveled with him in the past, and how they fell along the way.  We see, right up to the very end, that Roland’s curse is to follow his duty, and in the pursuit of that duty, walk across the backs of the beloved dead in order to reach his goal.

At the end of the books, he pretty much does that.  Jake and Eddie are dead and gone.  Susanna leaves him.  He’s lost everyone, but he perseveres until the Crimson King is defeated and he enters The Dark Tower.  He goes up each level, seeing his life.  At the last level of the tower, there is one more door.  He goes through it, and what happens?

The man in black flees across the desert, and the gunslinger follows.  He’s back to where we saw him at the beginning of the quest.  The cycle starts again, but there is hope that Roland has learned something.  That this time around, it will be a little bit different.

The Dark Tower series contains multiple endings.  Roland starting the cycle over again is one of them.  Another ending involves Susanna.  She is in another world, much like our own, but a little bit different.  She finds Eddie there.  This Eddie is much like the one she’d lost, but this one is alive, clean and sober.  And Jake is there, too.  Jake and Eddie are brothers, and they are both happy and alive.  They’re the same people we’ve loved through the series.  Just a little bit different.

I’ve spent a bunch of time talking about (and spoiling) the books, but before I go on to the movie, let me talk about one other minor point.  In the books, Roland laments that he should have taken just a few seconds longer at one battle, and picked up The Horn of Eld when his companion Cuthbert had died.  In his visions of approaching the tower, he saw himself standing on a hill, surrounded by roses.  He blows the horn before going to the tower.

When the cycle is restarted, a hint that things are different is that he has the horn.  Roland has grown and changed.  And if he has changed, then maybe the next time around will be different.  Maybe Eddie and Jake won’t have to die.

Now let’s talk about the movie.

The movie does not start with the gunslinger in the desert.  It starts with Jake having a vision of Roland’s world, and how Walter, the Man in Black, is using gifted children to attack the tower.

The movie focuses on Jake at the beginning, because when we get to Roland, he is a different man.  He’s broken in a fundamental way.  The deaths of his companions weigh on him.  He is no longer trying to get to The Dark Tower.  He just wants to kill the one responsible for the death of the ones he loved.

The characters are familiar, but a little bit different.  Does that sound familiar?

The movie is not trying to retell the story from the book.  It’s not an adaptation.  It’s an extension.  It’s a new chapter.

The movie even addresses this with one, subtle clue.  The Horn of Eld.  Roland doesn’t ever mention it in the movie, and no one remarks on it.  But look at this picture: 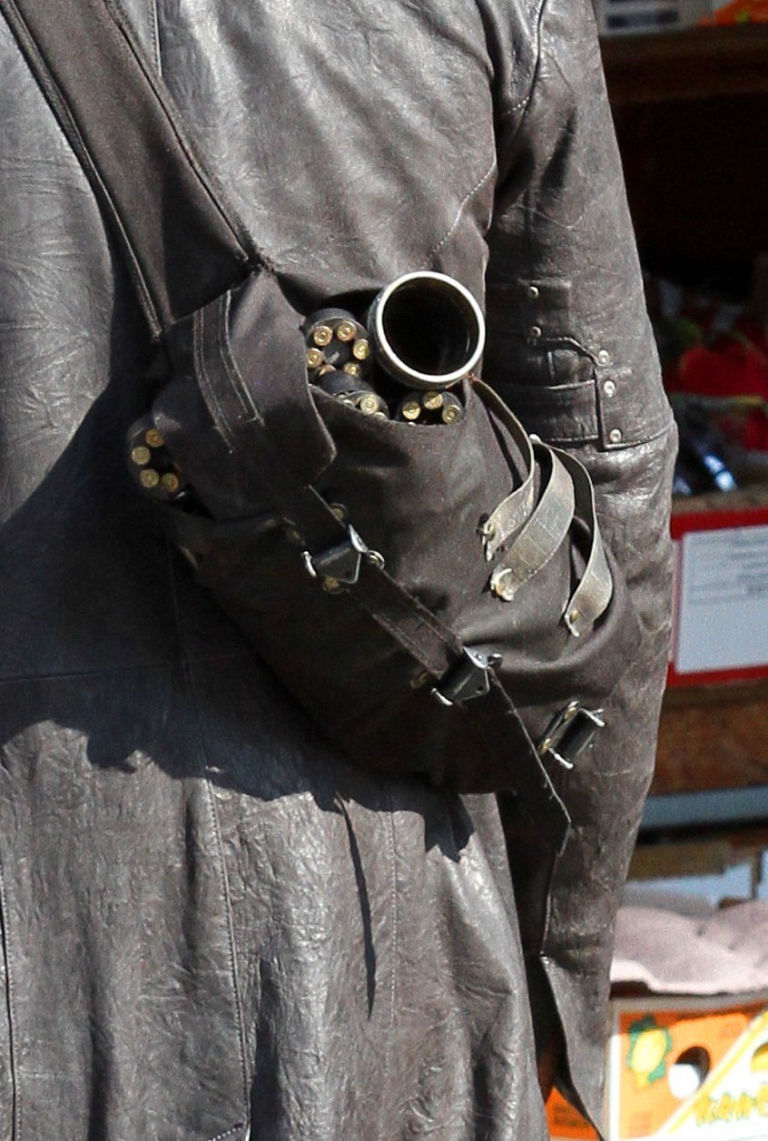 Nestled into that bag with all of that ammo is The Horn of Eld.  In this movie, Roland stopped when his good friend Cuthbert fell at the Jericho Hill.  He stopped, mourned the loss, and took up the horn.  In the movie world, if Roland reaches The Dark Tower, he won’t have the same regrets as the Roland from the books.

And yet, the movie is getting bad reviews.

Obviously, I went into it with a bunch of knowledge.  The lore from the books enriched my movie experience, and excited me every time I saw a nod to the story I already knew.

What about people that haven’t read the books?  Well, Idris Elba and Matthew McConaughey gave outstanding performances.  The set pieces were detailed.  The action was great.  Tom Taylor as Jake did fine.  The story was fine.  And at only 95 minutes, it didn’t drag on too long.  I didn’t notice any pacing issues.

Here is my theory.  I think the first reviews came from people that wanted to see the story from the books on the big screen.  People that wanted to see the Roland they enjoyed and adventured with for thousands of pages.  People that loved Eddie and Jake and Susanna, and were looking forward to The Drawing of the Three.  People that might have forgotten the ending of the series, or maybe put the endings out of their mind, because Stephen King isn’t known for great endings.  Besides, he wrote himself into the last books.  How corny is that?  Who would want to remember how The Dark Tower ended?

Since the story in the movies is so different than the books, it did not meet expectations.  Therefore, the movie is bad.

Let’s face it.  Some people on the internet started shitting on the movie as soon as they found out that Idris Elbas was cast as Roland.  In the books, Roland is described as looking like Clint Eastwood.  A thin, hard-case.  Idris Elba is not particular thin, and he really doesn’t look like Clint Eastwood.

After the first few bad reviews, Group Think took over, and now everyone is saying it’s terrible.

Obviously, I disagree with the bad reviews.  I enjoyed it.  I’m glad I saw it in the theater.  When it hits DVD, I’ll buy it and watch it again.  I’m sure I will see even more details that I missed on first viewing.

The bad reviews tell me that we don’t want new stories.  We want the ones we know regurgitated back on the screen.

I’m not sure what I’m going to do with that knowledge as I try to write new stories.